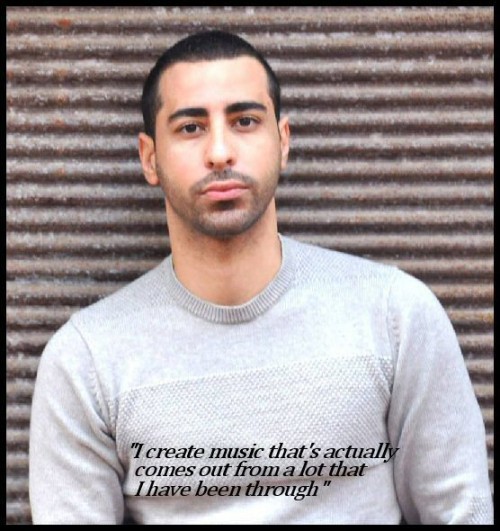 Talented and young Israeli singer and composer, Rami Talmid wrote the song for Mei Finegold, who represents Israel in this year Eurovision Song Contest in Copenhagen. We had a great opportunity to ask him about the most interesting and fascinating things just three weeks before the contest!

Less than one month left to the most popular european TV show called Eurovision Song Contest! In the time when bookies bet their types to win and Eurovision fans share their rankings of favourite songs, our site eurowizja.org speaks to Rami Talmid from Tel Aviv, who created song „Same heart„, that is one of hot fans favourite to get a Grand Prix of 59. Eurovision Song Contest. With Rami we talked about his attitude to music, all story of writing eurovision song and the closest plans related with preparation to the contest in Copenhagen. Feel free to read this exciting interview!

Kamil Justyniarski (EUROWIZJA.ORG): Hello Rami, first of all I would like to congratulate You due to Your great success in KDAM Eurovision 2014. Let me know Your opinion – Israeli song „Same heart” seems to be one of the favorite of this year Eurovision, fans of the contest felt in love with the composition at the first hearing.I would like to know when Your composition was created and what was the reason to write the song.

Rami Talmid: Hello everybody! So composition of this song was made in my home in Tel Aviv with my guitar, where most of my songs were created. It’s like I felt I was created by itself. Due to the strong meaning full lyrics. Chord lead to the other and it happened. Actually no change was made in the composition from the day it created till the day you first heard it. The song was written on a dear friend of mine personal story. I couldn’t ignore the intensity of the pain she felt when she told me that and right after I have written the music and lyrics at once.

There were 3 songs that took part in KDAM Eurovision 2014, but from the beginning all voting and polls in an Internet were won by „Same heart„. Did You believe in final success?

Rami: When I first heard the other songs at start I was a bit scared due to the fact they were all very good.  „Same heart” is different to me, because I know every bit of story, each word is saying, so it gets me excited every time. I believed in „Same heart” from the the day it was created. And I believe that truth reaches people regardless to their color, religion or nationality.

Did You know the song „Same heart” will be sung by Mei Finegold when You wrote it? Is it suitable composition for this artist in Your opinion? What is the strong site of performing it by Mei Finegold?

Rami: Mei is an amazing artist and vocalist and actually I don’t see anyone singing it other than her. When I heard she’s the one who’s going to represent us, I knew she’s the one that have to sing it. Powerful, emotional, independent and true to herself. It takes lot of courage to face fears in you and more than that it takes unbelievable strength to grow strong from them.

We couldn’t hear the live performance of „Same heart” by Mei Finegold anywhere. Did You have this opportunity? What the European audience can except from Mei in the Eurovision Song Contest?

Rami: I didn’t see live performance because that’s a matter that Mei takes really seriously, less than perfect is not acceptable. But it’s coming up real soon. And I am sure people would enjoy it and will be moved by it.

I would like to ask if You are going to join Israeli Eurovision team in Kopenhagen. Are You going to be in the contest in Denmark? Do you take part in preparation to Eurovision performance?

Rami: Of course I’m going as part of the team, this is a big recognition for me, and other than that it’s an amazing respect to represent Israel as singer/song writer of the Israeli entry for 2014. I won’t take part in the performance, Mei is amazing enough to do it by herself.

What is the reaction of Israelis for the winning song „Same heart„? Is the song promoted in local radio and TV stations?Is there chance to hear the song walking the streets of Tel Aviv or Jerusalem?

Rami: This year more than ever before the Israeli song is getting a lot of interest by the local radio/tv. And I think „Same heart” will bring back Eurovision to the Israeli audience. Regardless to Eurovision Israelis are saying that it sounds international and that’s a very important saying quality wise.

Let’s talk about Your music career. Is the song „Same heart” Your first big project or You had any experiences in this business already?

Rami: „Same heart” is the first song I have written to any other artists other than me. As a singer myself I love to do my own songs, but writing to others is not less respectable. It’s different but not less of amazing. To me every time I hear Mei sings it’s like I am singing through other person’s voice. I believe it’s just the start cause I do have few other numbers waiting to be hits. It’s just finding the right person too.

What kind of music You want to create? Who is Your inspiration in Israeli and international music industry?

Rami: I create music that’s actually comes out from a lot that I have been through, a lot I believe in and to create my own unique sounds and text. My Israeli inspirations are Eviatr Banai, Ivri Lider, Ohad Hitman and many more who creates music that moves me. I hear a lot of international music and it’s very versatile I love Alanis Morissete, Beyonce, Steive Wonder, Ray Charles, Nina Simon and many more…

It is really valuable for me to know Your opinion about good song and its characteristic. You are a songwriter – what kind of song can achieve the success? Does the song „Same hear” have chance to win Eurovision Song Contest?

Rami: When a good song is created you just know it. It has to come from the truth you believe in and has to take you too. When you see a picture created in your mind and that comes from the words/music that’s when you know you have a winner. That’s what I feel about „Same heart„, I heard it more than a million times from its birth too and every time in any stage it’s moving and exciting. To me it’s a winner of course and live politics aside its one of the best in this year entry.

My last question is related with my country, Poland. I would really like to know if You know some polish artists, songwriters, composers. What is Your first thought that comes to Your mind when You think about Poland?

Rami: I am not familiar with any kind of polish music, other than this year entry which I have enjoyed very much. Of course I wish all of Eurovision’s entries good luck, and may ESC will unite us all every year. It’s all about the music!

I am very thankful for Your time we spent on this short, but valuable conversation. Together with all team of eurowizja.org I would like to wish You good luck in Denmark! Who knows, maybe next year we all see each other in Israel 🙂

Rami: Thank You! Take care and see you!

Few days ago we all had a first opportunity to hear the live performance of „Same heart” by Mei Finegold. See the movie below: