Tijana: „In Denmark, my goal is to be in the first five”

by Maciej Błażewicz
in English
0 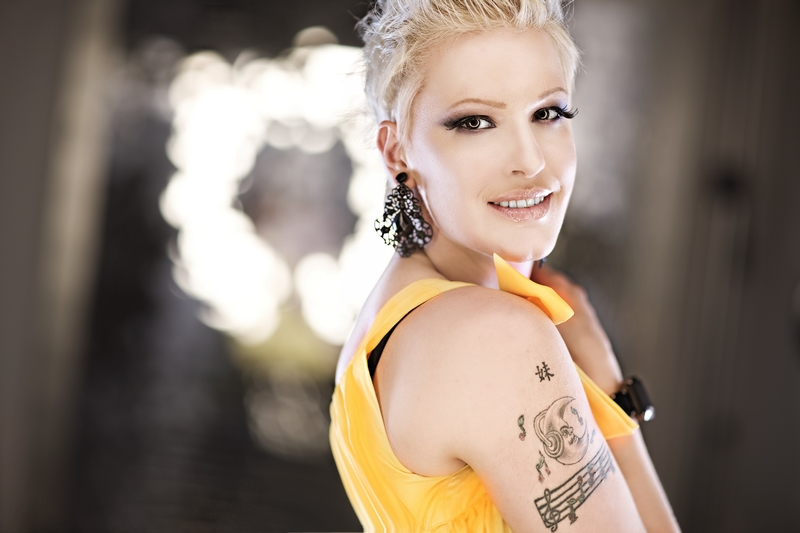 Eurowizja.org had the pleasure to speak with Tijana Dapčević from Macedonia. Popular singer will represent her country in the Eurovision Song Contest 2014.

Why did you decide to participate in Eurovision?

Macedonian Radio Television (MRT) offered me to represent Macedonia on ESC and I have accepted. To me, it’s an honour to have a chance to represent my country in such a huge competition.

Your sister, Tamara, represented Macedonia in the Eurovision 2008 in Belgrade, but failed to qualify to the final. What was the reason of this result? Is it true, that she will perfom as backing vocal in Copenhagen?

Yes, it’s true, Tamara will be do the backing vocals. I am not sure what was the reason of not making through the finals, really. I think it is important now to think forward and focus on the performance in Denmark, not to think about past ones.

What kind of song will you perform on stage? Which language will you use?

We are still working on the song, so we haven’t decided yet if it’s going to be in English or Macedonian. It has to be a fast song because we want to make a good party on the stage.

What’s the date of song announcement? Do you already plan to record the videoclip or any different versions of your song?

The premiere of the song is planned for 22nd February on Macedonian Radio Television. We are focused on the song itself now, there will be plenty of time for thinking about the other stuff.

What’s your goal during Eurovision and what do you think about this competition? Do you think, you are Eurovision fan?

I am a fan of ESC. I watch it every year and get really sad if we don’t make it through finals. When there is something that has to be done, I do it the best I can. In Denmark, my goal is to be in the first five.

Macedonia failed to qualify to the final several times already. What’s the reason of this failures? What’s your favorite Macedonian entry from ESC?

I am really not sure what the problem was, but we cannot change the past. We can only look forward and make the best effort to make it through the finals this time. My favorite Macedonian song is “Let me love you” (Tamara, Vrčak, Adrijan).

Which song was better – „Imperija” or „Pred da se razdeni”?

Out of those two, I will choose the second one – “Pred da se razdeni”.

You are popular singer in ex-Yu countries, but unfortunately Serbia and Croatia will not participate in Eurovision 2014, so you can not expect any points from them…

I was very sad to hear that Serbia and Croatia have decided not to take part in ESC because I live in Serbia and was really looking forward to see who would have gone to Denmark. I will not get the points from Serbia and Croatia but maybe now the diaspora will vote for me. 🙂

Poland will come back to Eurovision after 2 years break. Do you know something about our country or any Polish music act?

Unfortunately, I have never visited Poland and don’t know much about your country but I hope I will come some day. If I do, I will call you to ask what places I have to visit, okay? 🙂 Speaking of Polish singers, I know about Kayah and her collaboration with Goran Bregović.

Few years ago Polish singer Natasza Urbanska recorded song „Mala” which was copy of your hit „Sve je isto samo njega nema”. Did you know about that?

Yes, I have heard about that but there is nothing illegal about that song, really. The author of the song has sold the rights to Natasa and she has recorded it. I have the rights for this area and that’s it, everything is legal.

Why Polish viewers should vote for Macedonia?

Everyone should vote for the song that they think it’s the best. If it’s going to be my song, I will be more than happy! And if I win, you will have the reason to visit Macedonia, taste some of the best meals in the world and enjoy the beautiful scenery and awesome parties. 🙂

What should we wish you for new year? What’s your plan for New Year’s Eve?

You can wish everything that I wish you – good health because that’s the most important, peace, happiness, many great ideas and success. On 31st December I will sing on the main square in Skopje. I will spend holidays with my family and after that – back to work!

Thank you very much for the great interview and I really appreciate all the effort you have made. Keep up the good work and have the best of luck and great success in 2014! Happy New Year! See you in Copenhagen! 🙂